The ministry currently known as ACAC began over 100 years ago as the result of one man's vision and obedience to God. The man was Dr. A.B. Simpson, founder of the worldwide missionary denomination known as the Christian and Missionary Alliance.

Dr. Simpson originally had no interest in establishing a denomination. His vision, birthed by God's Spirit, was to unite interested believers from a variety of denominations in a strategic effort to proclaim the gospel to people groups everywhere. These believers would not leave their local churches, but would band together in an alliance created to advance world missions. Meetings were scheduled so they didn't interfere with the work of local congregations.

To advance this cause, Simpson traveled the United States sharing his convictions and passion. Whenever he encountered people who wanted to be part of fulfilling the vision, he established a local branch of the Alliance and appointed a leader. The Pittsburgh branch was established in 1894. Dr. E.D. Whiteside, a businessman who left his career to oversee Pittsburgh's first rescue mission, was asked to lead the ministry.

He responded that he was not capable, but stated that if the Holy Spirit would oversee the work, he would gladly run errands for Him. His humble reliance upon God set the tone for the ministry and is still one of our core values.

“I am not capable of superintending God's work in Pittsburgh, but if the Holy Spirit will superintend the work,
I would gladly run errands for Him.” - E.D Whiteside

The network known as the Alliance eventually became a denomination with local churches instead of branches. The small, newly formed Pittsburgh congregation didn't own property, and so it met in a series of rented facilities. Finally, in 1911, the congregation acquired property on the North Side and built its first sanctuary at 809 Arch Street. Due to its location, it eventually became known as the North Side Alliance Church. When new, larger facilities were made necessary by growth, the congregation sought the Lord's leading. No answer was forthcoming for over 20 years. Finally, in 1950, they were able to purchase a church building on Union Avenue. In the late '60s, the land fronting East Ohio Street was added, and the current sanctuary was erected.

The '50s and '60s were times of rapid growth and blessing. North Side Alliance Church became known as a center of evangelism and missions. Its people were used by God to bless and influence thousands of lives around the world. In addition to devoted men and women who glorified God in their daily vocations, the church produced numerous vocational missionaries and pastors. Many of these proved to be leaders in the work of God's kingdom. 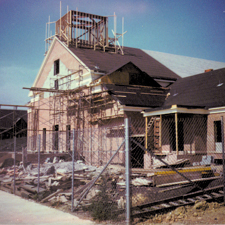 The 60s were times of change in the United States, and Pittsburgh was no exception. By 1970, the congregation found itself with a new sanctuary but significant challenges. The local neighborhood was changing dramatically. Like many urban neighborhoods, the North Side deteriorated and ultimately came to be associated with crime, poverty and decay. Many residents moved away. Many who moved in did so because rent was now inexpensive and they had few options. These changes called for an adjustment in ministry style that was initially misunderstood, feared and resisted. The congregation began to dwindle. By the early 80s, it had decreased from over 900 to under 400. Most of the members were white and came from surrounding suburban neighborhoods, not the immediate community. Like many older urban churches, its future appeared bleak and morale was tentative at best.

Fortunately God was not finished with what He had started. In the mid-80s He began to wrestle with the congregation. They, in turn, began to wrestle with the issues they needed to confront in order to fulfill God's call upon their lives. They gradually accepted a new perspective, seeing the problems of the neighborhood not as insurmountable barriers, but as wonderful opportunities to serve and glorify God. Previous racial attitudes and sins were confronted and confessed. New styles of proclaiming the timeless gospel message were developed. God began to establish a positive momentum.

In the years since that turnaround, ACAC has grown into a vibrant fellowship of nearly 3,000 people. This number represents hundreds who have come to faith in Christ, as well as a wonderful diversity of races and cultures. This diversity is the result of an ongoing commitment to reconciliation and is seen in the makeup of leadership as well as in the pews.

While intentionally remaining a metropolitan church with members throughout the greater Pittsburgh area, the church aggressively seeks to serve the North Side community. In the 90s, the church established the Urban Impact Foundation to open new possibilities in community development.  As the church's witness has been observed, the response has been great. Hundred of the church's members now come from the area surrounding the church's facilities. Hundreds more come from miles away, desiring to be a part of what God is doing. Some have felt called to relocate to the North Side to advance the church's mission. This has resulted in a clear witness before a watching culture, and Pittsburgh's mayor has applauded ACAC for its contribution to community restoration. As it seeks to serve as many people as possible, its overworked facility is buzzing with activity from morning 'til late evening, seven days a week.

This local focus has not developed at the expense of world missions. Today the church gives over one-half million dollars annually to further the proclamation of the gospel around the world. People of all ages are following God's call to vocational missions, and members can be found on virtually every continent. Short-term project trips involve hundreds in service and support.

The Bible tells us God is able to make all things new and to restore that which was lost. Despite some severe challenges and setbacks in its past, ACAC stands as a living testimony to the reality of those promises.